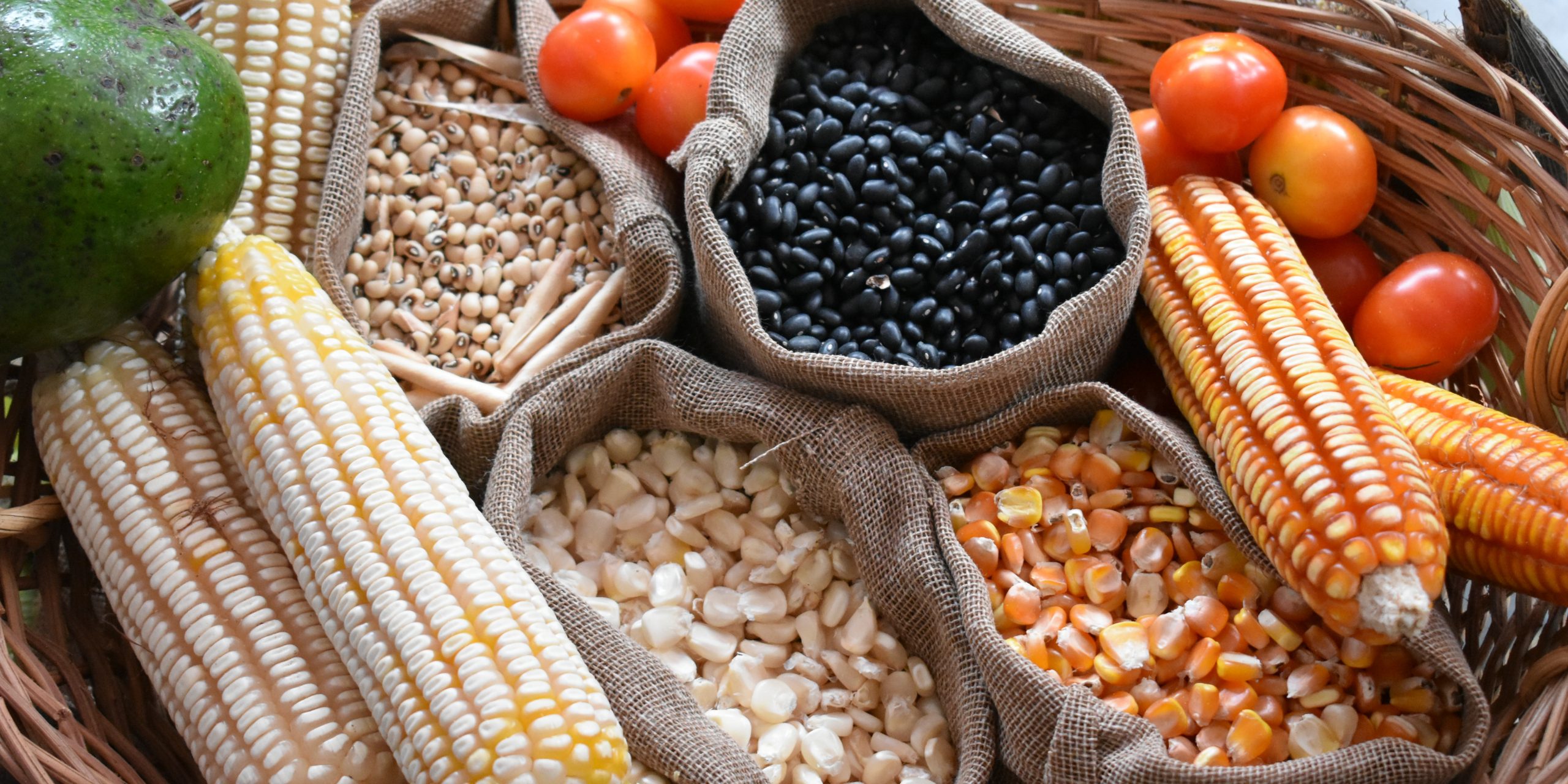 Corn is in almost everything we eat. It is invisible, but it is there. It gets a bad rap because the processed corn we eat isn’t good for us. Yet whole grain corn can be a healthy food.

Corn was the largest crop in the United States in 2019. A third of it went to animal feed, another third to ethanol, and the rest went to human food, industry, beverages, or was exported.

We grow a lot of corn in our country. In Maryland, a third of our farm acreage grew corn in 2020. Corn is in most of the things we eat, as well as many things we don’t.

Only about 1% of all US corn production becomes sweet corn, or corn on the cob. That means almost all of it becomes feed corn, and is used to make animals fatter faster, to make sweeteners, and to make lots of preservatives and industrial products.

If you eat processed foods, conventional meat, or take medicines, likely you are eating some form of processed corn. And our country’s health is not doing well on such a diet.

Whole grain corn is incredibly versatile. You can make cornbread, grits, popcorn, masa. It goes well with beans, with cheese, with jalapenos. Fresh whole grain cornmeal can be a delicious, healthy, inexpensive dish.

Most of the cornbread mixes you find at the supermarket contain degermed corn, or corn that has had the bran and germ removed. That means it lasts longer on the shelf. Yet the germ is where the nutrition is.

Whole grain cornmeal is what you want to get, as it is more nutritious, more flavorful, and can come in unique varieties. Keep it cold to keep the oils from the germ fresh.

Whole grain cornmeal can be made from either flint or dent corn, also known as field corn. Flint corn has a hard outer shell and soft center, and is used mostly for popcorn. Dent corn is the most common, and is easier to mill into flour.

Corn was domesticated from a wild grass called teosinte. The process began some 9000 years ago in Mexico. Over time, that small grass seed head became the larger, sweeter, softer corn we know today.

Over time, native American peoples learned to nixtamalize their corn, soaking it in an alkaline solution to soften the hull and flavor the corn. This had the added benefit of making vitamin B3 bioavailable, making corn a complete food.

Nixtamalized corn is traditionally used to make masa for tortillas and hominy for stews. It was a staple food for native peoples in the Americas.

Corn is easier to grow than wheat for the small time gardener. Growing your own is one of the the best ways to try unique heritage corn varieties.

Field corn for cornmeal is grown the same as corn for sweet corn. Instead of picking it, you let it dry on the stalk until before the first frost.

There are many types of corn out there. Flint, dent, flour, popcorn, sweet corn, and pod corn exist. Flint, dent, and flour are great for grinding into cornmeal, with flour the softest and flint the hardest.

Field corn and sweet corn are grown similarly. Plant in blocks, not rows, so that it pollinates properly, as it needs wind to pollinate each and every silk, thus growing each and every kernel.

Let the cobs dry on the stalks and harvest them before the first frost. Then pull back the husks and let them continue drying in a well ventilated place. Once dry, you can rub the cobs with your hands to pop the kernels off.

Grinding the corn can be done as with wheat or any other grain. If you want to try nixtamalizing it, Southern Exposure has some information on how to do so.

There are several farms that sell whole grain cornmeal and other corn products in Maryland. Dried corn is easy to store and transport, but ground whole grain corn should be bought locally and stored in a cold place.

Finally, if you want to buy local corn, you can eat decorative Indian corn. Make sure it hasn’t been varnished, and ask where it was grown. You can even try popping the kernels.

Try grinding corn for grits and cornmeal. Traditionally corn was ground for half grits and half cornmeal. Grits take a while to cook properly, but whole ground corn grits should have a good corn flavor compared to store bought grits.
Cooking Stone Ground Grits takes some time but can also be done in a slow cooker.

Besides grits and cornmeal, you can also make hominy (after nixtamalizing), hominy grits, masa, and polentas from whole grain corn. Traditionally different corns were used in different recipes. Flints, with shorter growing seasons, were used more in the north, while dents were used in the south.

Originally cornbread would have contained no wheat flour or dairy products, because those didn’t exist in America before Europeans came. Usually cornbread made now has dairy, wheat flour, and sugar added.

I love cornbread with chili, but also want to try making a flavorful pot of Pinto Beans to enjoy too. Beans and corn complement each other well, probably because the Three Sisters were grown together.

Whole grain cornmeal and grits are treats worth looking for. They are healthy and delicious, and there are lots of heritage varieties to try out. Look for different colors, different flavors, and find your favorite!

Cool Local Cucumbers
Local cucumbers will be in season from June through October here in Maryland. They add a satisfying crunchy and delicate

Finding Local Honey
Why Eat Local Honey? Buying local honey is the best way to ensure you are getting exactly the product you

Valuable Worm Composting
Whether you have a garden or not, everyone can compost their food waste. Worm composting is something anyone can do,

Preserving Fruits
During summer, preserving fruit is a great idea so we can enjoy it all year long. We can enjoy cheaper
1 2 3 … 14 Next »

Sign up to get the latest news about your Baltimore Foodshed!